Some of the recommendations are very specific and some are more general and less prescriptive.

As a basic matter Localytics says that roughly 52 percent of users opt-in to push messages. (It would be interesting to know which apps have the highest rates of opt-in for push.) The company said that the average click rate (those who engaged with the notification) was 5.5 percent. 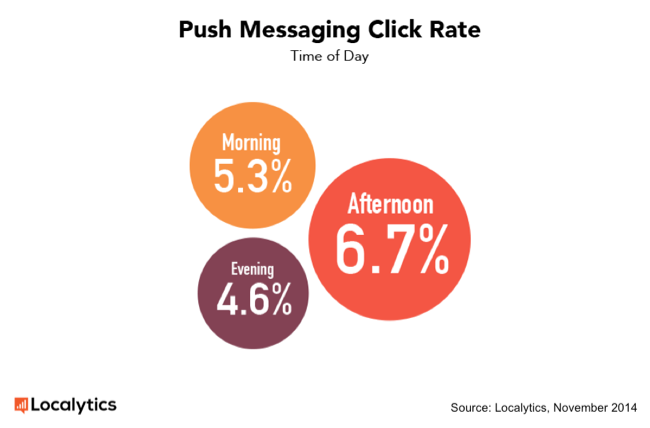 Localytics also reports that shorter push messages are generally more effective and produce the most engagement. It says:

Keep your messages clear, concise, and compact. You want to quickly make clear the purpose of the push message. With few seconds to catch a user’s attention (or sitting as just one in a list of notifications upon checking their phone), your message needs to identify the value, goal or reward behind the notification to prompt an open. Be upfront with the Ask, but make it primarily about what benefit the user will gain from clicking through.

My guess would be that effective email subject-line principles would apply here too. However that’s my speculation and not one of Localytics’ recommendations. 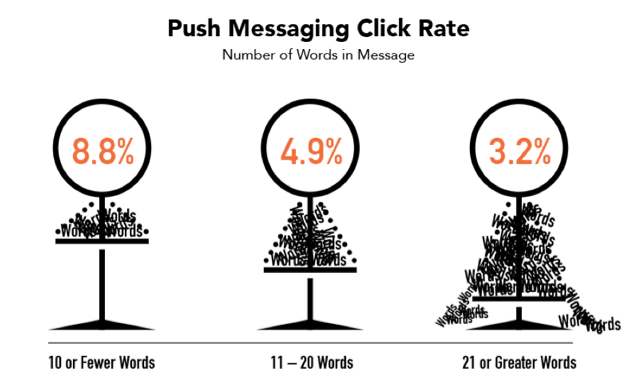 Statements are apparently more effective than questions. In other words, notifications should offer clear, concrete value that argue in favor of a click through — instead of trying to pique the user’s curiosity.

Localytics recommends learning from industries that have demonstrated success with push messaging, specifically travel and lifestyle apps. These notifications are typically timely and context related (e.g., flight delay). By analogy, the company offers an example retail alert that references a product relevant to the user: “Your favorite item: Burberry Check Coat – now 20% off.”

Localytics says that where appropriate notifications should contain deal-related worlds rather than language associated with gamification or contest-related words:

Words like “offer,” “super,” “ends” and “deal” surprisingly have a higher click rate than game-specific language. “Win” and “today,” in particular, saw poorer performance, signaling that while sales-based terminology garners more clicks, sweepstakes or one-day only deals might be less popular.

Business Management Courses For The Redlands

What you measure matters!
Scroll to top